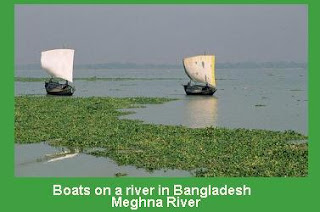 www.metroflog.com/jsabd
Water is Bangladesh blessing and curse for nearly half the year. The moon soon rains cause the country three Major River the Ganges, the Brahmaputra, the Meghna, and their tributaries to swell. Devastating floods are often the consequence. During the rest of year the dry season bring almost no rainfall and droughts threaten the livelihoods of people and the health of the nature or environment. Bangladesh was 320 rivers 42years before now only 220 rivers left balance 110 rivers grabbed by the Influential people. Independence with 42 years time among this 220 rivers two third rivers are also dead rivers and grabbed continue by the Influential people of the Society.
Posted by Md. Jamal Hossain Buiyan at 1:03 PM No comments: 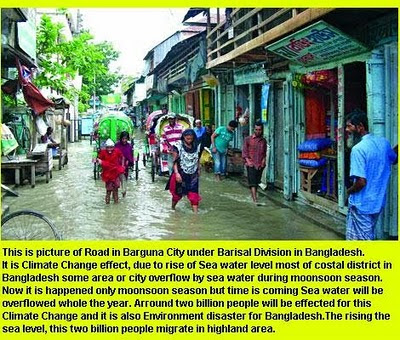 This picture of Road in Bargina Costal city under Barisal Division in Bangladesh. It is a Climate Change effect, due to rise of sea water label. Most of costal district in Bangladesh some area or city overflow by sea water during moonsoon sason. Now it is happend in moonsoon season . Time is coming after 10 to 15years sea water will be overflowed whole the year. Around two billion people will be effected in Bangladesh for the Climate Change problem. In future it will be human catastrophes for Bangladesh. Climate Change effect, flood, shortage of drinking water, this two billion people will be migrated in highland area from costal area.Now, what happend there, During moonsoon season some area "Kalapara" goes under 7to 8 feet under flood water specially people face problem of Laluah Union, Ramnabad area some villages Chandupara, Charchandupara, Bara pach number, Choto pach number, Chowdury para, Charipara village agriculture family sometimes they could not cooked their food because their kitchen under flood water. Sometimes Kalapara and kuakata ferry ghat service closed 7 to 8 hours for overflow fery ghat by flood water. This is the story there now in moonsoon season . Future story more painful and more human suffering. So, day by day people will be migrated form that area to other save area in Bangladesh. if this two billion people migrated from costal area to other area , it will really human catastrophes for Bangladesh.
Posted by Md. Jamal Hossain Buiyan at 12:23 AM No comments: 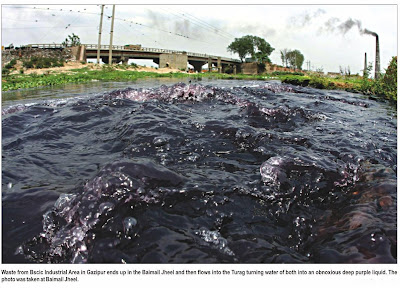 152 industries wreaking havoc in Turag River, Savar, Dhaka, Bangladesh. Villagers along polluted Turag moving to safer places. Indiscriminate discharge of liquid waste by the industries in and around Konabari industrial zone has ruined a large part of the Turag river and Baimail jheel, causing immense suffering to residents living on the banks. Industrial liquid waste and black smog created by brick kilns have dubled the suffering and compelled many to move their houses. Locals say brick kilns have left their fruit trees unproductive, while industrial waste exterminated fish in the river and nearby water bodies, increased mosquitoes, and made croplands infertile. Bangladesh government established the Konabari Bangladesh small and cottage industries Corporation( Bscic ) industrial area in early 1980 to promote and and expand small and cottage indutries, Since then industries are polluting surrounding environment despite getting different facility packages from the government. Recently, the Bscic authority have made a list of 152 polluter Industries that include 56 dyeing and Textile industries, 50 chemicals and pharmaceutical , nine food processing and 37 other engineering industries, None of these industries has installed an effluent treatment Plant ( ETP ) The Basic provided the industrialist with land in subsidised price along with many other facilities, But most of the industries are paying back indiscrimnately polluting the environment. Since the begining the government was providing tax holiday for five years and no import duty and Vat for capital Mechinery for these polluters. Stincky blackish water was seen flowing in the Turg river as liquid waste falls in the river directly from the industries. Massive suffering of the people was witnessed during visits to the surrounding villages including Baimail, Kodda,Kashimpur, and Konabari, Besides industiral waste, dust from the brick kilns aroundadds to the suffering of the local inhabitants. We cannot use the river water in anyway. Even we can not take bath there, Besides dust from the brick kilns in also causing much suffering to us. says Bailmail villagers. Just 12 years ago the Turag and Baimail jheel had a veriety of fish. Now no fish can survive here.The industry waste has spoiled everything. Villagers from kashempur  say it is a big problem for them to collect water from tube wells for bathing, washing, and drinking. For the last few years we are not getting fruits, coconut, banana, mango from the trees, if I wash my hand in the river waters it stinks like Kerosene, their corrugated Tin made houses are being demaged with in to three years due to dust frombrick kilns.
Posted by Md. Jamal Hossain Buiyan at 3:28 AM No comments: 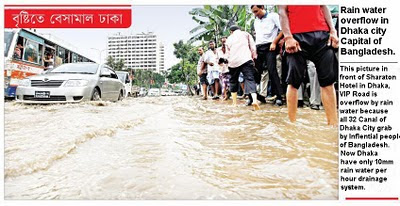 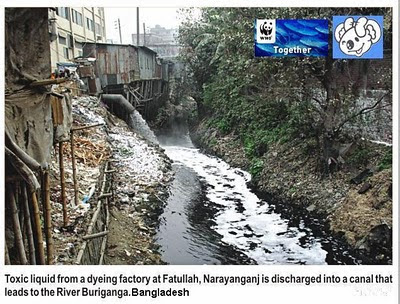 Picture shows Toxic liquid discharging from a dyeing factory at fatullah, Narayangonj into a canal that leads to the Buriganga River. Despite making repeated pledges, many of the industries especially those of fabrics dyeing and tannery continue polluting rivers water, canal and other wetlands in the city just to boost their profit.
Posted by Md. Jamal Hossain Buiyan at 3:42 AM No comments: 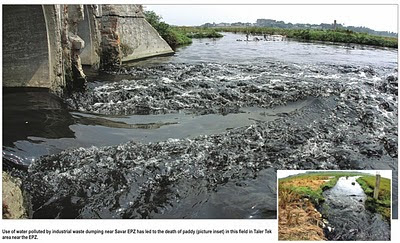 Industrial waste water grave peril Saver in Dhaka, Bangladesh.Untreated waste from Dhaka Export Processing  Zone,DEPZ pollutes water farmlands since1983: no CETP installed yet, around two hundred thousand people exposed to serious health risk. Untreated liquid wastes from Dhaka Export Processing
Zone ,DEPZ have been polluting the Bangshi River and other water bodies around, putting around two thousand people of twelve villagers in the area into tremendous health risk. Only a couple of decade ago the villagers used water from the nearby water bodies like Dholai beel for drinking, bathing and irrigation.
But now the water of Dholai beel and Bangshi River looks pitch black and it stinks as wastes from DEPZ, where many of World famous brand items are produced continue to pollute the water. Inhabitants of the villages around Dholai beel in Saver, where the DEPZ discharges its untreated effluent, said the wastes have severely contaminated the land there, and they cannot cultivate Paddy now, The pollution has thus threatened the existence of some traditional livelihoods while villagers often suffer from water-bone diseases. Polluting more than 1,000 acres of land in Dholai beel, the filthy water pours into the Bangshi River in Saver, Dhaka.The pollution spreads over the villages during floods. In the 143.84 hectares area of DEPZ there over 300 idustrial units, including Chemical,Leather, Textile, Agro-based industries, garments and garments accessories, woven and kintted fabrics, Medical and biological Pharmaceutical industries and Backward and Forward linkage industries. Under an open door policy the government established the DEPZ in 1983 to attract foreign investors but it is not yet to set up a central effluent treatment plant, CETP for the industries in the DEPZ.
Posted by Md. Jamal Hossain Buiyan at 10:06 AM No comments: