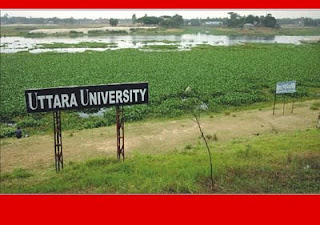 Dhaka city, Bangladesh became a concrete jungle, developers with the idea " River View" and "Lake View"
housing project are making good business through most of them don't have government approval.
Uttara university has erected a signboard on the floodplain of the Turag river in Dhaka, Bangladesh.
Amid encrochment by housing estates, private universities an refuelling stations, the tiny Turag river in Dhaka, the major flood flow system of the capital from north to south is being choked and reduced everyday. The rivers on the papers of Water Devlopment board 218 meters in width at Mirpur point. However, years of grabbing has reduced it to less than 18 meters in width in many places. Local says some government officials have bought a vast swath by the river and fill it up for a housing project called Paratyasha Housing. Different other housing companies are now filling up the river elsewhere.
Uttara University has projected to buy around 20 bighas of land  in Kamarpara village just beside the Tongi-Ashulia Highway and already registered 11bighas.
This area is identified as the Sub-flood flow zone in Dhaka master plan, most of which has already been filled up as the government authorities keep blind eyes.
Posted by Md. Jamal Hossain Buiyan at 1:13 PM No comments:

Turag river is grabbing year after year in Dhaka, Bangladesh 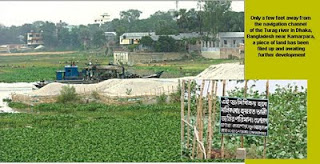 Only a few feet away from the navigation channel of the Turag near Kamarpara, a piece of land has been filed up and awaiting further development. Turag river in Dhaka, Bangladesh was much deeper and wider when I was a school boy. I did not dare to take bath in the river, recollects a nostalgic local man when asked how he saw the river in his  childhood. Now that the Turag river has been indiscriminately encroached. It is no longer a mighty river.
As the Dhaka city is expanding northwards, the price of land started to shot up especially sine the Dhaka protection embankment was build in the early 1990. Soon some influential people from the capital dhaka invested huge amount on land and started grabbing the river with the help of the local people.
Posted by Md. Jamal Hossain Buiyan at 4:36 AM No comments: