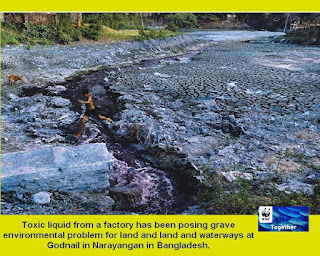 Toxic liquid from a factory has been posing grave environmental problem for land and waterways at Godnail in Narayangong for years. Local peoples have complained about the waste dump times and again but in vain. Meantime, the land was arable is now dried up and contaminated with hazardous substances. The Toxic effluent keep flowing through a canal in to the Shitalakkhya river. The primary estimates made in this study show that nearly 330,000 kilograms of BOD is discharged from various polluting sources everyday Dhaka watershed.
Posted by Md. Jamal Hossain Buiyan at 5:18 AM No comments: