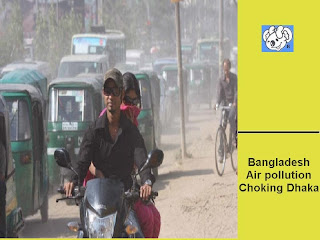 Thousands of people in Bangladesh capital, Dhaka,are dying prematurely because of Air pollution says heath expert. An estimated 15,000 premature deaths as well as several million cases of pulmonary , respiratory and neurological illness are attributed to poor air quality in Dhaka. According to the Air quality Management project ( AQMP) funded by the government and the World Bank.

The World Health Organization (WHO) says vehicular air pollution is a major cause respiratory diseases in Urban Bangladesh.

If pregnant mothers come across excessive pollution , It may cause premature death of their children said"Sofia Khtun" a Professor of Paediatrics at Institute of Maternal and Child health.

According to the National Institute of Diseases of Chest Hospital ( NIDCH ) nearly seven million people in Bangladesh suffer from Asthma, more than half of them children suffering from bronchitis and chronic coughs have also shot up in recent year it said.

Children breathe more air relative to their lung size than Adults, they spend more time outdoor.
Posted by Md. Jamal Hossain Buiyan at 12:40 AM No comments: 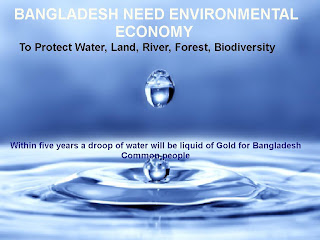 A droop of water will be liquid Gold for common people of Bangladesh within 5years because as a country Bangldesh government could not protect Water, Land, River, Foreast and Biodiversity. Bangladesh need Environmental economy which is called "Green Economy" it is not costly process only need to knowledge and political commitment. In Europe, Germany already done green economy. Enviroment protection and conservation is not just about finding out ways to implement green farming and green energy development techniques. Its also about implementing the right procedures to improve and manage the sources of water supply and ensure that the rural population gets a constant and hygienic supply of clean water both for drinking as well as for other purposes, keeping this in perspective.

Modern concepts related to clean water management and through well scheduled program of events. it will be ensured that the techniques are implemented in the proper manner. And will also try to ensure that these method are being followed by closely monitoring the events and keeping a track of the progress through periodical evaluation.

Improving rural water and sanitation, Hygienic living and water supply is an important part of the overall growth and development of rural population as it is base on these factors that health and family welfare can be ascertained.

Educating and imforming the public about clean water and environment protection is as important as implementing newer and more efficient techniques.
Posted by Md. Jamal Hossain Buiyan at 6:30 AM No comments: 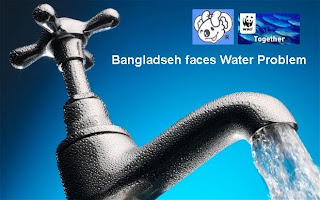 Dhaka, the capital city of Bangladesh faces severe water shortage, particularly during the annual March to May dry season. While the city need 2.2billion liters of water a day. It can only produced 1.9 million-2 billion says Dhaka water supply and sewerage authority,
WASA, Managing Director Taskin A. Khan said that, Dhaka ground water level is depleting 3 feet a year the Financial Express reports. Shortages were so severe that some areas of Dhaka had no water for several days prompting protests from residents.
Rain in Mid-April improved the situation but experts say the problem of inadequate water is likely to continue. The source of water is not properly managed, which will put the city at risk of severe water shortage in the future expert Mujibur Rahman told IRIN, the news service of the United Nations office for the coordination of Human Affairs, noting that the city heavily relies on hundreds of Deep tube wells to extract more water,
Residents in some areas of Dhaka said that when there is a supply water from WASA, it is too dirty and unfit consumption. Even despite boiling it more than an hour, the bad smell does not "go" a Dhaka resident told the Financial Express newspaper, adding that water retains a yellow-red-colour.
Stronger action is needed now , Government step in addressing this problem to date have been inadequate-Kairul Islam, country representative of Water Aid in Bangladesh was quoted as saying by IRIN.
Dhaka water problem stem mostly from an over-dependence on ground water and the World Bank notes that the city obtains most of its water from over expolited aquifers,
Water experts have called for the city to increage use of surface water source such as ponds, rivers, and canals, Initiatives to cut the dependency and increase use of surface water should have been taken earlier "IRIN" quoted water expert Feroze Ahmed as saying. But water problems are not just limited to Dhaka. The World Bank says that more than 80 million people in Bangladesh are protentially exposed to arsenic contamination.
The government of Bangladesh signed US Dollar 75 million financing agreement with the World Bank for a project aimed at supplying safe water for around 1.6 million living in rural areas where water supplies have high arsenic or salt content. We are scaling up a private public partnership model with a proven track record of delivering safe water rural populations says Country Director World Bank, Bangladesh.

Posted by Md. Jamal Hossain Buiyan at 1:02 PM No comments: