BANGLADESH: Dhaka city corporation Election, Voting not well at all. 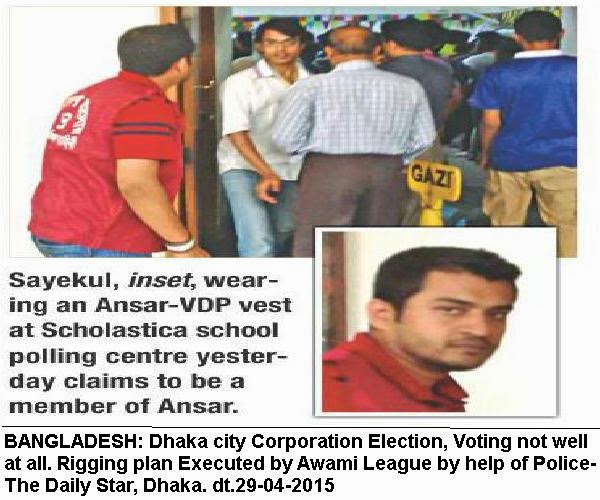 The day started high on hops for a fair election but it was not bfore the optimism was blantanty doused. Activists of the pro-rulling Party Awami League Student front Bangladesh Chattra League cadre large occupied polling stations and other Law Enforcement Agency Police, RAB, BGB handing them a helping Hand.
To cover their tracks, they made sure, the journalists Access to the Scenes of wrongdoings is restricted. Take for instance, The Dhaka colleage centre. At arround 9: am about 100 activists of pro rulling Party Awami League Student Bangladesh Chatrra League stormed into the near empty venue was filled with cacophony split of Groups, they took control of all the six boths of the centre 343 and started casting vote at will. They grabbed the Ballot paper books stamp them with the Hilsa Symbole of Sayeed Khokan , the Awami League backed mayoral candidate for Dhaka City South and stuffed them into the Ballot Boxes.

Posted by Md. Jamal Hossain Buiyan at 5:43 AM No comments: