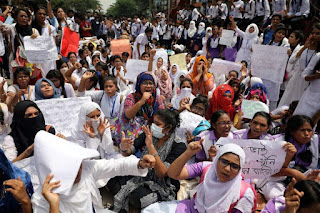 Today I received this report from Human Rights Watch. As a German mainstream politicians without any documents I never want to say anything about Bangladesh. This big report lot of picture included Video.
Report says- Thousands of student, including school children, have been blocking streets in Bangladesh to protest the killing two students by a speeding bus, their demand ? That the government invest in road safety.
But photo and video from the scene of the protesters with sticks and machets. Eyewitnesses and journalists also reported police standing by while children were beaten up.
Now instead of prosecuting those responsible of these attacks, the government is going after the protesters, locking up those whose only crime seems to be peacful criticism.
Total 57 cases file by government against protesters and 97 students arrested.
Posted by Md. Jamal Hossain Buiyan at 3:29 PM No comments: