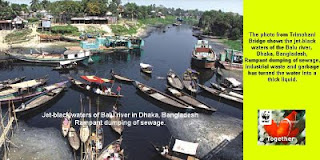 Pollution gets to Dhaka city ground water, Bangladesh. A recent study jointly done by the World Bank and the Institute of water Modelling ( IVM ) says- The ground water in Hazaribagh , Dhaka home of toxic tannery industries as the most affected . It is quite likely that in the long run groundwater would be effected from the surface at solid waste or industrial effluent dumping ground.
Posted by Md. Jamal Hossain Buiyan at 1:05 PM No comments: 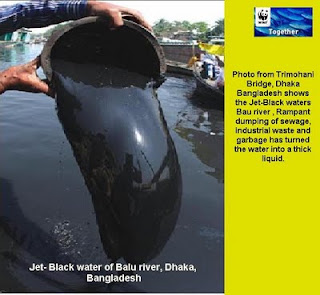 River polluted around the capital has reached such a level that the groundwater system where the aquifers are recharges from the riverbeds is being contaminated. A recent study shows. In the six month from November to April virtually no water but only stinky mucky liquid flows in the gradually in the narrowing rivers- the Buriganga, Shitalakshya,Turag, and Balu as  no government could stop discharge of liquid waste into them.
A recent study jointly done by the World Bank and the Institute of Water Modelling ( IWM) says. The ground water system is being contaminated in areas where aquifers are recharged from the riverbeds. The pollution is creeping towards the central part of Dhaka city within time.
Posted by Md. Jamal Hossain Buiyan at 4:22 AM No comments: